Here’s something we as technicians see a whole bunch of….bad hub bearings. Whether they are causing the Antilock Brake (ABS) light to come on, or are just making a terrible grinding or growling noise as you drive, these are replaced almost daily at our shop on just about every model of vehicle. Today I had a regularly seen vehicle in the shop, a Chevrolet Equinox. The customer was complaining about both the ABS light being on, and a noisy condition while driving.

After a quick test drive, I heard the usual ‘growl’ type noise from the front end which is almost always a bad hub bearing assembly. Sometimes very worn tires can make this same type of noise, but it is usually discernable between the two with some experience. Along with the ABS light being on, I felt pretty sure just one of the bearings was at fault.

Getting the Equinox racked up so I lift it in the air is a great help since you can have the drive wheels turning and then get under and give a good listen to each hub. I found it was the left front that was making the noise. I also scanned the ABS system to check for trouble codes and found a code stored for the left front wheel speed sensor, a C0035. Now, with little other diagnosis, it was basically confirmed that the customer needed a new left front hub bearing assembly.

For those of you who don’t quite understand much about these hubs, let me explain a little. The hub bearing handles the load of the vehicle between the suspension knuckle and the actual wheel that is bolted to it. The ‘bearings’ inside it are not serviceable as it is a sealed unit. Also, the wheel speed sensor for the antilock brake system is an integral part of the hub assembly as well. There are windings and/or a reluctor ring inside that transmit the signal to the system.

When one or more wheels are transmitting a different signal than the others, or if one or more wheels has no signal at all, that’s when you will set the ABS light on and trouble codes will be stored. More often than not, it’s the hub assembly that has gone bad, but there are instances where the wiring is to blame outside the hub area and up into the actual ABS harness. Rubbed through areas, or ‘chaffing’ as it’s called can wreak havoc on a wheel speed signal, as well as moisture and corrosion. All of this should be checked out when diagnosing this type of problem.

As for this Equinox, it was indeed the hub that was bad, with internal failures causing the bearing noise and setting the wheel speed sensor codes. Replacement requires removal of the brake caliper and rotor, the axle nut, retaining hardware for the hub itself, and disconnection of the ABS harness connector. Pretty straight forward stuff, but this body style is known for excessive corrosion between the suspension knuckle and hub. Being different metals, steel and aluminum, they corrode excessively and basically become welded together. Removal often times requires the use of large hammers, air tools, prybars, and a lot of patience. I’ve even personally had a hub that was so badly stuck to the knuckle, that a press was needed to separate the two, and even ended up snapping the knuckle in two!

Luckily this particular hub came off pretty easily compared to others, and was a fast repair. Down the road they went, happy with a properly functioning ABS system and without the terrible noise they had before. Another satisfied customer! 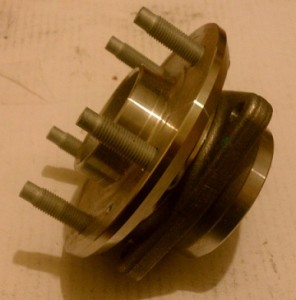 Grinding noise in front end and ABS light on. 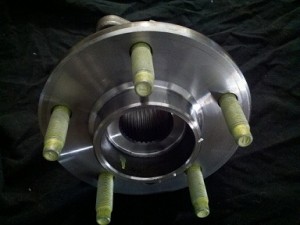 Grinding sound and ABS light on.

8 Comments on "Common Cause For Chevrolet Equinox ABS Light"

2005 Chevy equinox
I have no lights but abs kicks in between 5km/hr to 2 km/hr. when slowing down. And thats when i hear the abs activating. I had a mechanic scan the ABS code which was pointing to front left sensor. I’ve even had the bearing replaced. No luck ,same noise. Replaced pigtail harness. Again no luck. Now i m thinking of replacing the cable from the end of the pigtail to abs module.
The funny thing is that the abs would only kick in at slow speed while i m stopping on left turn (parking lot) or straight (@stop sign). It won’t activate if i m slowing/stopping to make a right turn all day long. I really need some help. If i could find nd out what voltage i m supposed to read with multimeter on the left wheel speed sensor while i spin the wheel. I think it would make my life a little easier.
The other way i m thinking to use a diode and point both left and right speed sensor to read the input of just the right sensor. I don’t think the abs is really worth the hassel. I could pull a plug but don’t wanna see light on the instrument cluster.
Please let me know what the voltage should be along with any other input you may have. I also noticed that the reluctor ring in the brand new hub was moving back and forth. Thanks in advance.

This is the exact issue I’m having on my 06 equinox. I’ve replaced the speed sensor and had the bearing replace to no avail. Did you find a solution?

Actually sometimes it is only the reluctor ring which is at fault. As in my case a piece of the reluctor ring is broke off. It is not an integral part of the bearing assembly, it is glued on, made of a different material. There is nothing wrong with my bearing but because of poor engineering the whole assembly needs to be replaced. They had to glue these on so why couldn’t they be replaced.

Sticking with the best workouts, you need to do is puodns training. The best ab training exercises aren’t the boring crunches and situps that you are used to doing. Remember, an ab exercise has to accomplish two points. Move your torso toward your hip or hip toward your torso AND supply resistance in this motion. Perform your abs like you perform every other muscle and also you will see fantastic results.

A hub bearing replacement costs about $500 at the dealer with factory parts. At a local mechanic, expect to pay about $300 with aftermarket parts.

How much did that repair cost

i will never by anoter chev