With the warmer temperatures coming a little bit early this year, we have seen quite a few cars coming in the shop with air conditioning problems. Once people start using their air conditioning, they make a bee line to the shop if it is not cooling properly. Usually we can hook up our A/C machine to a vehicle and tell right away what the problem is. Lower pressures usually mean an under-charge condition and will most times freeze up the evaporator or lines. A system that isn’t fully charged only means one thing, a leak somewhere. If the pressures are high, that tells the technician that there could be a restriction somewhere in the lines or components, a faulty part, or over-charge condition.

I recently had a Ford Crown Victoria police car from a local township with multiple air conditioning problems. This car had been worked on previously by some other shop and had a new condenser and accumulator installed on the car. They were complaining of the air conditioning freezing up and then not blowing cold.

I rolled our A/C machine over to the car and was about to hook it up to the high and low side connections on the car, but found something interesting. Someone had installed a stud into the high side fitting,  probably to try and stop a leak. This basically left me with no way to properly diagnose the problem. Sure, I could have just hooked up the low side connector and done some tests on the system, but that really isn’t the right way to do things.

I informed the service writer that in order for me to properly diagnose the car’s problem, I would have to replace the high pressure line where the fitting had been ruined. He sold the job right away, since these guys obviously wanted to be nice and cool inside the car! I got the new high side line and installed it on the car. Now I could actually test for the real problem they were complaining about. After getting a good vacuum to hold on the system and found no leaks, I charged it with the proper amount of R134A refrigerant and ran the air conditioning. It was nice and cold, the pressures were holding steady and everything seemed just fine.

Then I started hearing a noise coming from the air conditioning compressor assembly. It was a knocking type noise that would come and go, get louder and then get softer. It was surprising to hear this since the pressures on the gauges were holding steady. Usually when there is a internal problem with the compressor, that will make the readings fluctuate pretty badly. So, in my opinion, the system was functioning ok, but more than likely they would be needing a new compressor down the road once it completely failed.

Now, since this is a township police car, money really wasn’t an issue. After describing the problem to them and the possibility of needing a new compressor sooner or later, they just opted to get it fixed right now. That was good news since it meant more money in my pocket as well.

I quickly installed a new A/C compressor on the car and got everything hooked back up, vacuum tested, and charged. It was all good, nice and quiet, pressures great, and very cold air blowing out of the vents. I’m sure the police officers who drive it will be highly appreciative! 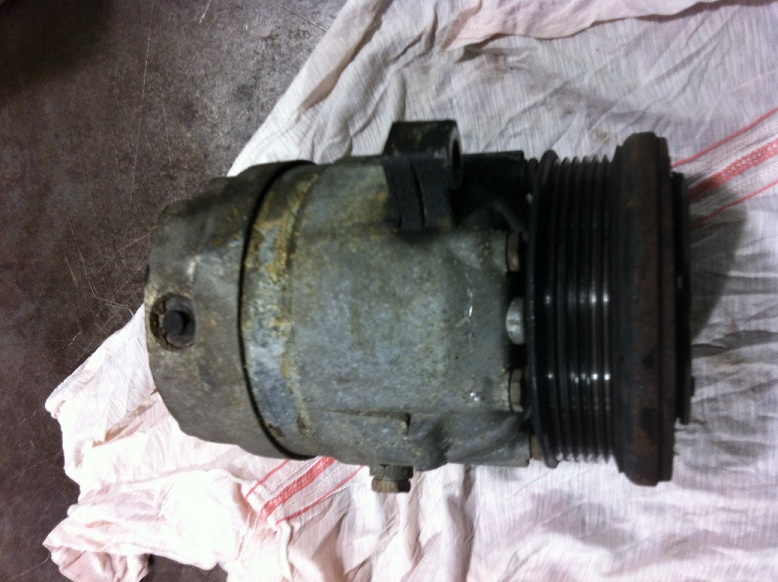 11 Comments on "Ford Air Conditioning Problems As Temperature Gets Warmer"

99 crown vic presser is too high or too low. freezes over no leaks too high turn car off then on too low

If the ac system freezes over, then the Freon charge is too low and you have a leak somewhere.

Hello,1999 Ford Crown vic P-71,in winter heated air blows out the vents only,no defrost/floor or mix.
In summer a/c works blows cold out of the dash vents but the fan isn’t blowing hard like it use to.
I have the glove box and airbag out.The blend actuator seems to move when I turn the blue red blend control
The vac actuator under the glove box also will open and close the door with the foam inside the little grill.
I thinking the white colored actuator shaft going inside the black box behind the climate control could be broken off but the ACT still turns about 22 degrees
I also have the climate control panel off,I see green,white ,blue and red Vac lines,one of the vac nipples is open but dos’nt hiss.
I’m lost,this CVI has a newer compressor and I had it re-charged at JMAC in Salt Lake city,Utah.According to those”mechanics” no refrige leaks,no vac leaks.
Please help Thanks Tim

I got a ac compressor install in my 99 crown vic…It was replace with a new compressor now 30 days later I’m having the same problem noise that come and goes the compressor run than stop run than stop …What could be the problem?????

Sounds like a bad compressor. Probably a cheap part.

So maybe a week ago I noticed that my car was rattling a little, then as the days went by it got worse it shakes very bad when I stop at a light. Then one day it idled really low and cutoff. It cut back on but it wouldn’t stay on. So it occrured to me to cut everything off and it worked (the ac was on high) so now I turn the a/c off when I get to a stop light and I also noticed that when I turn the ac on its like my car is losing power. Any answers?

You may have an air conditioning compressor locking up. That would drag down the motor. If it happens with the fan speed being high and the related to the compressor clicking on, then you have an electrical problem causing a load on the charging system.

Hello – I have a 2007 Ford Mustang GT – When I place the keys in accessories, before I crank the engine, there seems to be a clicking sound coming from inside the dash. Almost AC like? As you can see the AC is in the OFF position, and this clicking occasionally happens when driving ( I think it’s when I turn the AC on).

This sounds like one of the A/C system actuators. Hard to determine which one. As you turn the key on, the motors are trying to find HOME. The clicking is a motor reaching the end and still trying to adjust to HOME. It is sort of an automatic calibration that takes place every ignition cycle. It could be one for the temperature door, mode, blend door or fesh air/recirc. You need to get the car running and adjust all the different positions to find out which one is not going full one way- full hot or cold, defrost to vent to floor, or the recirc to fresh air.

Thanks for the quick response!