Last week I got to work on a Chevrolet Corvette that had an overheating problem. This was no ordinary Corvette though, it was a Supercharged Callaway Corvette! Let’s just say it’s quite a bit different than your regular every day Corvette. At first I thought there may have been some engine problem causing the overheating condition. Being supercharged, and having 560 horsepower, I figured it would be quite easy for the owner to have gotten this engine hot from abuse or hot rodding around. After some checking and letting the engine run, I discovered that there was no problem at all with any mechanical part of the cooling system. That’s good news, because something like a blown head gasket on one of these engines would be VERY expensive to repair.

After some more checking, it seemed there was a cooling fan problem. It didn’t seem to be coming on when it should, and when it did, it wasn’t running at full force. With the car up on a lift, I was inspecting the fan, shroud, and wiring, and found out that as I pulled around on the wiring I could make the fan run faster. I knew I had located the problem! I took the harness down from the connector and found that is was completely burned up. The connector itself was melted and the wires were almost exposed bare.

This was an odd situation to come upon, especially since I have never seen this problem on any other Corvette before, let alone a Callaway Corvette. This would have happened from one of two things, or even a combination of both. First, the fan motor could have been shorting out and getting hot which can melt the wiring. Or, second, there is a separate control module for the fan that could have had an internal problem and overheated the harness.

Luckily, the only way to get a new fan motor or module for the Corvette’s is to get it as one complete assembly. This includes the fan, fan motor, shroud and module assembly. Even the harness is included when you purchase this assembly. This covered all the bases to which ever part actually caused the failure. Changing it out, though, proved to be a lot harder than a regular Corvette!

With the supercharger installed, the added length of the snout and throttle body makes for a tight squeeze for the fan assembly. Along with the added wiring, tubing and cooling pipes that comes with the Callaway package, it was a rough job. After it was all said and done, the overheating problem was fixed and we had a very happy customer. I even got to take this car for a drive, and it sure does have some power. I personally don’t believe in beating on customer’s cars, but just from the stop and go driving around the roads near the shop I could tell this Corvette was a fun car!

I’ve included a picture below of the engine compartment, and as you can see it is stuffed! Looks good! 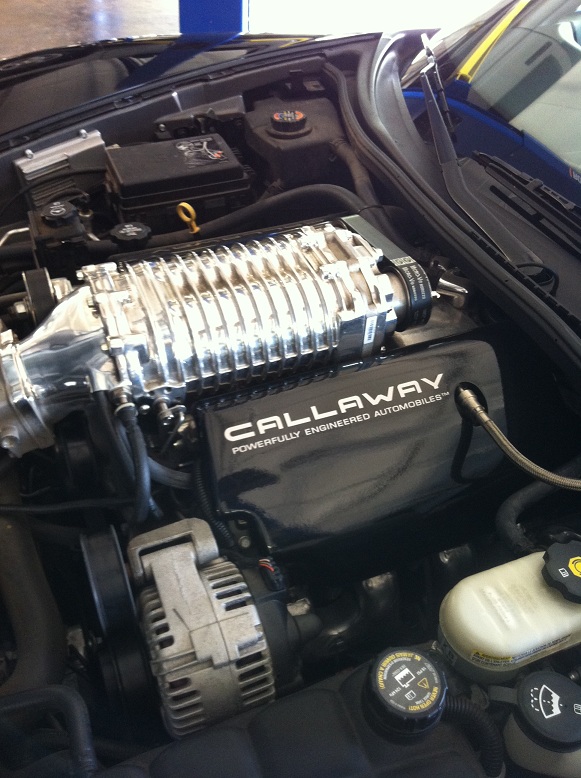 Thank you on Corvette heating problem! I will check wiring etc. Hopefully I will have the same problem with the fans and order fan assembly. Phil

my cv would heatup to 220 and then the fans would kick in. I didn’t like this so i installed a switch wiring to ground and to the green wire on the relay drivers side. the green with may have a black strip on it. When i want to turn on the fan i can keep temp down in the 180 range

Your blog is a good place to catch news, indeed. Well done!