This article comes about by the seemingly mass confusion of where the thermostat is located on 2002 and up Chevrolet Trailblazer, GMC Envoy and similar body styles with the 4.2 liter inline six cylinder engine. I’ve seen many times, in person and online, people claiming the thermostat is on the right (passenger) side of the engine, inside a small housing that looks very similar to the V6 engines housing. This is NOT the case at all, and people that do not know what they are talking about can be misleading the regular guy trying to fix his vehicle.

On earlier model vehicles, and even the S-series Blazer that was still out when the new body style Trailblazer came out, they had a V6 engine with the thermostat located right in the front, on top of the intake, just about dead center of the engine. When the inline six engine came out in the 2002 and newer Trailblazer, the thermostat was re-located to the left (drivers) side of the engine, behind and a bit below of the alternator. See pics below. The housing and hose that is now on the right side of the engine is just an inlet housing for the coolant. There is NO thermostat inside THAT housing on the Chevy Trailblazer.

As you can see in the provided pictures below, the thermostat on the Trailblazer 4.2L straight six cylinder engine is an integral part of the outlet housing below and behind the alternator, and is NOT serviced separately. You CANNOT just go to the parts store and get a thermostat in a box. This unit needs to be replaced as a whole. The repair can be made through accessing the bolts to the housing through the left front wheel well opening, or if you prefer, the belt, and alternator can be removed, but that is a bit more work.

I really hope this clears up any confusion you may have heard elsewhere. When it comes to a situation like this, you really need the correct information from someone who does this for a living! 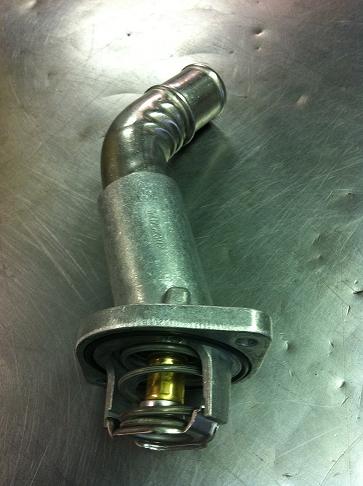 ProTech:
After refilling the radiator, let the truck run for a while with the cap off. It should bleed out any air easily that way. You may have to top off once the thermostat opens, but probably not that much. Once it’s hot, and circulating, put the radiator cap back on and you’ll be good to go. This also works on the Chevy Trailblazer.

44 Comments on "Where is The Thermostat on Chevrolet Trailblazer"

Need to locate thermostat on a 6.0 liter Chevy trailblazer

Need to locate thermostat on a 2008 gmc envoy

My 2003 Trailblazer has a check engine code the thermostat is out of bounds. Chevy mechanic says replace the thermostat.
What else could be the issue? Before I spend $450 on parts/labor.

Can this cause the ac to blow hot

Where exactly is the thermostat located on a 2004 trailblazer. Some sites and YouTube say its located behind the alternator and others say its located attached to the top radiator hose connected to the engine.

On a Trailblazer- thermostat on the 4.2L straight six cylinder engine is behind the alternator. On a Blazer with a 4.3L v6 the thermostat is on the upper radiator hose on top of the engine.

MY THERMOSTAT WAS STUCK OPEN ON MY 2004 CHEVY TRAILBLAZER WITH A 2.4 LITRE MOTOR BUT NEVER RAN OVER 195D. I CHANGED THE THERMOSTAT AND NOW THE TEMP GAUGE CLIMBS REAL FAST BUT DOESNT RUN OVER 210D. WHY WOULD THAT BE. ALSO WATER IN THE RADIATOR IS NOT CIRCULATING LIKE I THINK IT SHOULD

Hi….my car got heat up on a highway and the mechanic told me to remove the thermostat without replacing the whole unit as there is no new unit available at him or nearby. HE told me that it wont effect anything.I had no other option as i had to go further on that road. Is it real urgent that i replace the whole unit as soon as i reach any city.

i just changed my thermostat my self last saturday and now my temp gauge is saying the truck is running at 212 but actually running at 204 by the computer. the only thing is im not running hot. all the fluids are full no leaks or cracks. what could be the issue? im also thinking about changing the coolant temp sensor as well. any help PLEASE im supposed to be driving to south flordia for christmas and dont want to get stuck

WE just changed the Thermostat on my 2055 Chevy trailblazer 6L 4.2 its on the right side behind
the alternator.

I am having over heat problems but h20 seems to be moving when thermostat opens. I look underneath engine and all is dry, no fluid on ground, but in the rear of blazer out of what looks like A C pipe there is water gatering on a sheet metal cross member. Does engine coolant run thru A C pipes or ?

Nope that is condensation from your AC

Thanks pal for the reply..Sorry it took so long for this ,thanks the the TCCM Is on the Left side on top of﻿ the Heater vent on left side , i had to remove the 4 lower bolts and 2 bolts that held up the left Heater vent and was right there..Man i wedonr why they put such a part in this place ;} ??wish it was on the fire wall like other yr models Ughh any way thanks anyway..

I just completed the thermostat installation. Had to move the alternator though to get the top bold out.
It was just too close to get in with the extension. Moving the alternator made it a lot easier to install the therm. housing
and hose. It was a lot of work to get it done. But I’m glad I was able to do it.
Thanks again for that good info.

It’s about time somebody knows what they’re talking about. Thanks for the info.
I have a 2003 TB and there is a lot of bad info on some sites.

Damn I wish I had seen this article before killing myself for THREE HOURS taking that stupid thing off on the passenger side!!! I was told by a “mechanic” that thats where it was…lol. thanks fir the great info!!

i was putting a thermostat for a 1999 oldsmobile alero.and now i cant get the bolts to go all the way back in the housing cover where the thermostat go.help!

thank you,almost starting replacing the thermostat on the passenger side!

how did you get to the bottom bolt to change out the thermostat that is on the passenger side of an 04 chevy trailblazer?

Use a universal joint or even better a wobble end extension. That will give you enough angle to get that bolt to remove the thermostat housing.

so I tried goig through the wheel well (had to buy an extension) but the top bolt is behind the alternator, how did others get to that bolt?

Nice article and clarification on 4.2L I6 Trlblzr,GMC,Envoy;Several emails & mechs. have put articles for DIYs out there w/incorrect info…its not one text book proceedure fits all..appreciate those of us actually work on these vehicles putting accurate articles with pixs or diagrams as yours…keep em running brother!!!

Reply
In a jam

What tools do I need to replace my thermostat on a 2005 trailblazer trying to do it my self and any of you guy have a problem with a number 5 cylinder miss I replace spark plug,coil pack and rubber boot or spark plug wire and it still missing help

You just need a 10mm socket on a long extension and jhose clamp pliers. Get to the bolts through the drivers side wheel well opening.

Changed thermostat today . What a Mother %$%%$$ to get to! also changed belt while alt. was off thanks for the help. Peace out and Merry Christmas !

This sounds like the the radiator may have had an air pocket and needs the coolant topped off. Also may need to replace the tiadaror cap as the system needs to be able to build pressure. Worse cause would be a blown head gasket but you would notice a loss of coolant in the tiadaror.

http://greatautohelp.com/sensor-location/4200.html
Quote 04 GMC envoy 4.2L can you tell me where is can find coolant below temperature sensor.

There is no such sensor. I am guessing that you have a
check engine light with code P0128- coolant temp below
thermostat regulating temperature. This code is cause by
either low coolant level, or more likely- a bad thermostat.

the link that brought me here says there is no coolant temp. sensor see thermostat

If what you are saying is true and that the vortec inline 6 has no coolant temp. sensor then why does auto zone sell one ?Duralast/Coolant Temperature Sensor
For your 2004 GMC Truck Envoy 4WD 4.2L SFI DOHC 6cyl
Price: $29.99
Please help before i spend my money

The coolant temp sensor on a 4.2L inline six is just above the thermostat behind the alternator.

Who said there is no temperature sensor? All I see talking about is the thermostat location, not any temp sensor?

Sorry to say but my 2004 has the thermostat located on passenger side of block near power sterring pump. Trying to figure out how to get out and find right part.

That’s not the thermostat housing, just the inlet for the upper house. On all Trailblazers and Envoys with the I6 is located on the drivers side, low and behind the alternator.

That’s where I thought it was located too. Let me know how it goes and how to replace it. A picture of the thermostat when you do it would be great too !

You really saved me some money with this information. Thanks!