I have a 1995 Camaro 3.4 litre, will not start and has no spark….ran 2minutes this morning and just shut off. Still would not start after 2 hours. Getting gas. Coil packs and camshaft positioning sensor has been replaced and still no fire.

ProTech:
So it is getting fuel, but still does not have any spark, correct?

Do you by chance have a scanner?

Well, first of all, the cam position sensor will not prevent the car from starting. A bad crankshaft sensor would. Also a bad ignition module could cause your problem, as well as the computer or any number of wiring issues. You are going to need to find out if the engine has fuel injector pulsing or not. If not I would suspect a bad crank sensor. A scanner is really needed to see if you have any codes, and engine RPM while cranking. Without that, you would just be guessing. If you can get one that would help greatly. I would recommend checking for cranking rpm on a scanner. If you do not have any, it’s most likely a crank sensor. Otherwise you might be looking at a ignition module, or even PCM.

Is there a way to get the code by grounding the testing terminal prongs…..Autozone says I have the old test terminal under the dash so they can’t check it.

Yes. You need to connect terminal 4-8 I believe, it has been years since I have done that. You may not have a code at all…was the check engine light on?

It’s been on for 3 years, and that code is for an EGR module.

If it’s been on that long, there could be 20 codes in there by now. I would definitely get it scanned by a real mechanic, not an auto parts store. 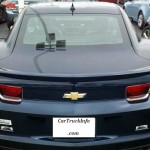 Also i have a 1994 z28 Camaro that stalls when i give it gas. I have replaced the fuel pump pressure regulater and filter. what am i missing?

That could be an ignition problem causing the stall condition.

I have replaced the ignition system.

Then I would recommend a fuel pressure check to see if the pump is putting out what it should.

Anything else i could check off hand?

An EGR valve that is sticking open can cause a stalling condition as well.

Well that’s really about it. Check fuel pressure, you could have a fuel pump that is not putting out enough pressure to run under load.

Just to re-cap when i step on the gas it is like someone turn the switch off?

Could it be vaccum leak some where?

No it would not be a vacuum leak unless caused by a bad EGR valve. If you had a constant vacuum leak, the car would hardly run at all. If you are losing fuel pressure that will happen.

3 Comments on "1995 Chevrolet Camaro Has No Spark at Plugs"

fuel pump (I bet you could see that coming). I said you sure. He said yeah and blah blah blah. I piekcd the truck up the next day, drove perfectly home, started perfectly in the morning, started perfectly in the afternoon, didn’t start that evening. Same sound, same problem. Towed the truck back and the guy says it started perfectly for him and he had it running for an hour (I’m thinking about all that gas)and he can’t find a problem. Now I’m confused and bewildered. I pick up my truck, make a few stops in town, drive 7 miles and park. I knew when I turned it off, she wouldn’t start again. Except she tried, a couple of hours later and actually caught for a few seconds and puttered out.Here I am.Is anybody out there?

I have the same problem with my Audi. On the other hand I have tested the coil pack, plugged in computer to test for codes and got nothing. I figure It’s the knock sensor or crank sensor. You can hear the fuel pump when you turn the key on to start it.