I had the pleasure recently, or displeasure rather, of getting a customer’s vehicle that was overheating and running very poorly. Once I got in and started it up, I knew it was going to be pretty messed up. The engine was knocking, misfiring, and almost immediately going into the red on the temperature gauge! I pulled it in and the first thing I did was remove the radiator cap. I found the radiator to be bone dry. Wondering where the coolant had gone I raised the vehicle up to check for leaks. It was a high mileage van, so I figured there would be some sort of coolant leak somewhere. Nothing found, just the usual oil seepage and greasy undercarriage of an older vehicle.

I filled up the radiator with a mix of coolant and water and restarted the van to see if it would leak, or overheat quickly. It did start to get hot rather quickly, and I noticed a steady stream of bubbling coolant mix which pretty much told me there was a cylinder head problem. Along with being empty, the radiator and radiator cap were almost totally caked up with a muddy looking substance. This usually comes from age, mixing different kinds of coolant, lack of maintenance, or oil contamination.

A quick check of the oil level dipstick, and I found out where all the coolant went. It was about 12 inches over the ‘full’ mark on the dipstick and the oil was a light brown, muddy color. We in the mechanic world call this a milkshake, and this engine was full of it! This is what happens when the oil and coolant in your car mix. Most times, detrimental engine damage is just around the corner. This van was no different. They had been driving this way for at least a few months and this was the reason for the misfiring, overheating, and general disarray of the engine.

They had an extended warranty, and in situations like this, the warranty company always wants to know the point of failure. Whether that be the intake gasket, head gasket, or some other internal failure. I had to disassemble the top half of the engine, and the further I got inside, the worse it looked! After removing the intake, I could see the entire inside of the engine, coolant and oil passages were literally plugged solid with gunk. This basically renders the engine unrepairable, as it is very difficult to clean all that stuff out of the block and heads. The rear cylinder head was taken off also, and it was just as bad. With excessive overheating, the head gasket can blow and even warp the cylinder heads. I could see on the spark plugs and the inside of the combustion chambers that the van was burning coolant. It was bad!

I’m still in the process of trying to get a new engine approved by the warranty company. That is about the only thing that will fix this one!

So, please be sure to check your oil and coolant levels regularly, perform the recommended maintenance schedule for you vehicle, and hopefully this won’t happen to you. In the pics below, you can see how bad this engine actually is. The inside of the valve cover, filled with muck. Same for the top of the cylinder head and valvetrain. Inside the chamber you can see the actual build up of burned coolant on the spark plug electrode. And finally, the pic of the inside of the engine’s valley, which should not be filled with that light brown substance. 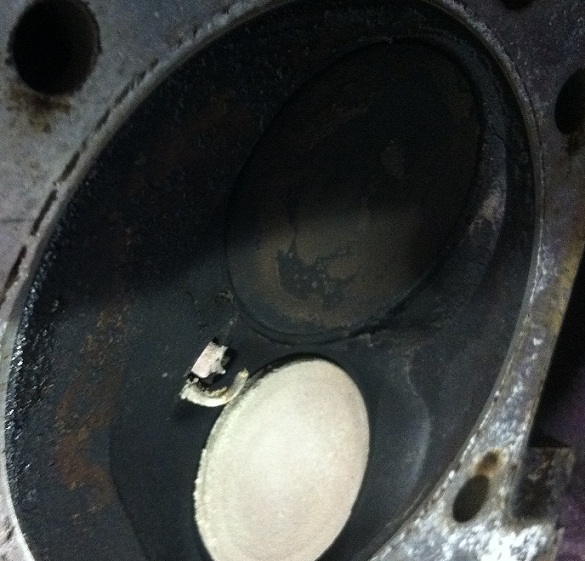 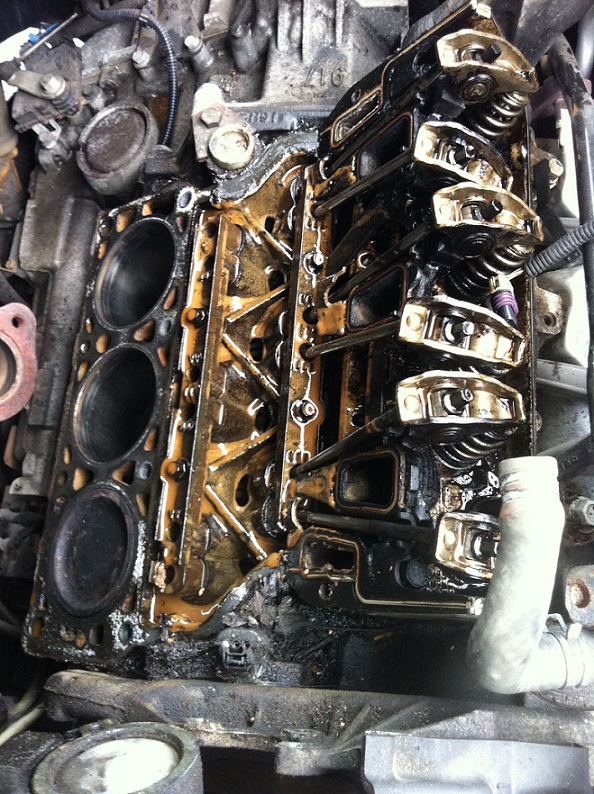 Hi on my1997 Buick Park Avenue the oil light keeps coming on and off but the car has oil?

I would recommend getting the car looked at, and put a scanner on it as well. You could have a code for the oil pressure switch, which is easily replaceable. A mechanic can also do an oil pressure test on your car.

Where is that switch located on the Park Avenue?

It is located in the engine block, below the cylinder head.

Great thanks for your help.

1989 Chevy Suburban ran good did head job blown gasket put back together and now no fuel to throttal body someone told me my computer went out i dont know i dont have a clue what to do cracked fuel line at filter and turned key on no massave amount of gas it will kind of run as long as you pour gas in it.

I doubt the computer is bad unless you shorted it out by touching a hot wire where it shouldn’t be. I would suggest you go over all of your work, including electrical connections, etc. It has to be something you did since it was fine.

5 Comments on "Oil and Coolant Mixing In Engine- Pictures"

I have a 2002 Ford E250 cargo van 5.4 eng. I’m going to be honest here by admitting and taking fault of oil contamination inside of my vehicle’s cooling system. See I accidentally did so the other day as I was refilling my water reservoir but used the wrong container for doing so. Instead of used coolant container(like I assumed) it was motor oil. Empty but never crossed my head the walls inside of that container would be recipe for disaster. A month later now and I can’t kick my self in my you know where, enough for having done so….I know…
Please tell me where to start or how to go about repair. I see it all inside my radiator, hoses, water reservoir,intake and throttle body.

How much does it cost to repair suburban freeze plugs?

Live Chat: If you’re looking to replace all the freeze plugs on your Suburban, it can get expensive, especially if there is excessive corrosion on and around them on the block and plug itself. The harder they are to remove will increase the cost of the labor to do the job. Also, some of them are harder to get at than others, such as the one located behind the starer. There are also freeze plugs in the back of the engine block which would require the transmission to be removed to install new ones. As you can see, this could end up being an expensive job. If you’re just looking to have one or two replaced because they are leaking, that’s really all you need to do.

I have coolant in cylinder. Head gasket not blown out. Head not warped cant get a .003 filler under straight edge. Can head bolts stretch or why would it leak.

You could have a cracked cylinder head. Many times will crack between the one valve seat to the other, but could happen anywhere. Since you already have the cylinder head off, send it to a machine shop to check for cracks. The bolts can stretch. Depending on what engine you have, new bolts may be require during gasket replacement.